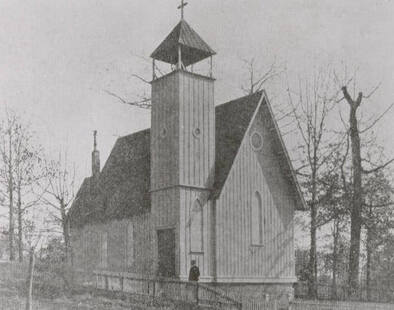 Bishop Theodore B. Lyman fully supported the mission in Old Fort, but also wanted to see an Episcopal Church in the McDowell county seat. In 1881 he sent the Rev. Charles T. Bland to McDowell County to serve St. Gabriel’s and to found a church in Marion.

Both parishes thrived, often sharing the services of a Rector until the flood of 1916 when St. Gabriel’s was broken apart by a landslide and floated off its foundations.  Beyond repair, the building was abandoned and the congregation merged with St. John’s in Marion.

St. John’s, services were held in private homes and other church buildings for the first two years (1881-83).  In June of 1882, a 60 x 90 foot plot of land was purchased for twenty-five dollars and construction began in April, 1883. The finished building was valued at $1000 and had a seating capacity of seventy-five.  It is likely that the original building design was based upon a plan book by Richard Upjohn, designer of Trinity Church in New York.

The first service in the new building was held on Thanksgiving Day, November 26, 1883 although construction and furnishing of the Church building was not completed until 1886.  In 1891 the church was consecrated by Bishop Lyman with seven families and ten communicants.   In 1897 the first Rectory was purchased. Records report it as being an “old house” on a lot extending from Main Street to Garden Street. In 1963 a building committee was formed. On review, they recommended that the old rectory be sold and a new house purchased.  That purchase remains as our current rectory today.

​In 1991 St. John’s Episcopal Church was listed on the National Register of Historic Places.  The North Carolina Historic Preservation Office then recommended extensive repairs including foundation repair, added crawlspace, removal of built up paint and repainting and the addition of gutters and downspouts to channel water away from the foundation, which were carried out in 1994.

In 1944 the Sacristy and Choir Room were enlarged and the church nave was extended by seventeen feet toward Main Street.  For many years, there were dreams of having a Parish House to support the church activities and finally, on April 29, 1956 the cornerstone was laid for the building we now use for our offices, activities and as a hub for our outreach ministries. In 1965 a playground was established outside the Parish House.
In 1998 the St. John’s Episcopal Men’s group constructed the St. John’s Peace Chapel and Pavilion located beside the Community Garden.  This space is used for outdoor gatherings including the annual Pentecost Service, the Pet Food Bank, a space for bagpipe lessons, and many other events.

In 2002 St. John’s purchased the property south of the Parish House and this became the site of the Columbarium/ Memorial Garden and Labyrinth in 2010.